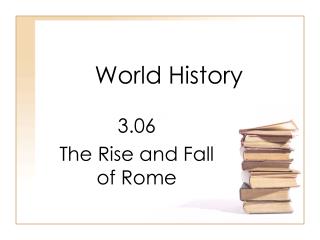 World History. 3.06 The Rise and Fall of Rome. The Assignment. Assignment 03.06: Please answer the following question in complete sentences using the information you learned on the previous pages.

WORLD HISTORY - . introduction definition? quotes? what is history? why study history? what do we learn from history?

World History - . unit 1: beginning of civilization ch 1 &amp; 2. taking notes from my presentations…. do not

CRAFTING THE GLOBAL CITIZEN IN MODERN WORLD HISTORY - . what is the global citizen?. geographically literate has a base

World History I - . unit six block six lecture the pax romana. make sure that you are viewing this in “slide show”