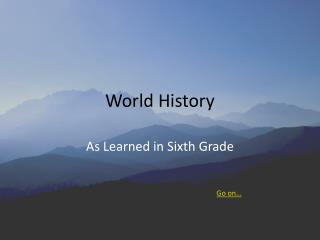 World History. As Learned in Sixth Grade. Go on…. Instructions. World History - . 12/16/13. warm-up. why was the battle of the atlantic important? why did the success of d-day mean that

World History - . unit 3 middle ages review. unit 3 review. 1. what was the chief goal of the crusades? a. to spread

World History - . historical terms. bc =“before christ” before the birth of jesus christ the founder of christianity.