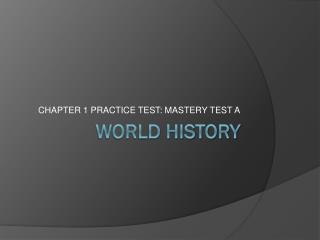 CHAPTER 1 PRACTICE TEST: MASTERY TEST A. WORLD HISTORY. PART A. (Culture, History , Civilization) is the record of past events. First-hand, or eyewitness, accounts of an event are ( primary , secondary, false) sources. World History - . 12/16/13. warm-up. why was the battle of the atlantic important? why did the success of d-day mean that

World History - . unit 3 middle ages review. unit 3 review. 1. what was the chief goal of the crusades? a. to spread

World History - . as learned in sixth grade. go on….

World History - . historical terms. bc =“before christ” before the birth of jesus christ the founder of christianity.