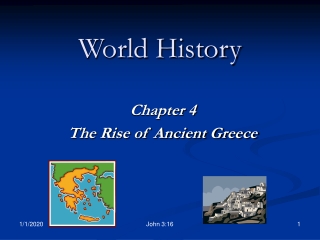 World History. Chapter 4 The Rise of Ancient Greece. Chapter 4, Section 1, Beginnings. The Aegean Area Aegean Civilizations Poets and Heroes A Family of Deities. Overview. Objectives. Understand how being close to the sea made the Greeks seafarers World History - . florence leads the way (15:2). quattrocento. the century in which the renaissance fully bloomed

American History 2000 - present - . y2k. world is paranoid that technology will shut down. people prepare for the “ end

Name three things you learned this week in World History. - Debrief: warm up 3-2-1 on a separate piece of paper answer

AP World History - . the whap survival guide. about ap world. ap world is a course that will enable you to learn more

The History of the WORLD! - . brought to you by the 1st most awesomest teacher in the world. mr. winsor (yes it is him…