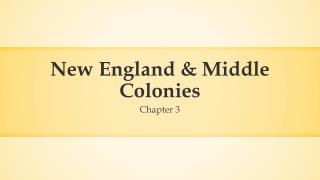 New England & Middle Colonies. Chapter 3. Puritans’ Religion. The Puritans kept the religious freedom they had gained to themselves. They set up a government that required everyone in the colony to worship in the same way . Roger Williams. The Middle Ages - . objectives…. identify chronologically when the middle ages began and what the periods primary

Opening: - . in class you will need a writing utensil, a piece of paper, and a highlighter if you choose to highlight. .

England and Constitutionalism - . james vi (king of scotland) becomes james i of england in 1603 (upon elizabeth i death)

The Geography of the Middle East - . kristen wilhite. middle east fun facts. the middle east is not a continent. it’s a

13 Colonies and the Seeds of Revolution - . warm up?. what could be some reasons that would cause you to move to another

COLONIAL REGIONS - . jamestown. was colonized primarily for economic reasons. after initial failures as a corporate