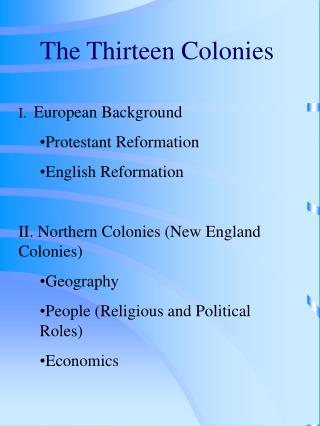 AMSCO Chapter 2: The Thirteen Colonies and the British Empire - . 1607-1750 emily stearns. background. when was the

The 13 Colonies and their Identities - . the new england colonies the middle colonies the southern colonies. the new

13 Colonies - . new england, middle, southern. 13 colonies. along which ocean are these colonies located? what natural

Thirteen Colonies - . ss4h3 the student will explain the factors that shaped british colonial america. compare and

Making Connections - . connections are ways that readers relate to what they are reading as they try to better understand