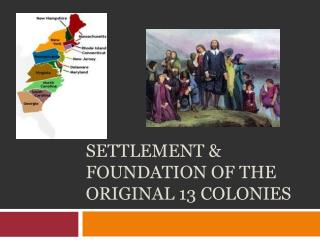 Settlement & Foundation of the Original 13 Colonies Settlement & Foundation of the Original 13 Colonies

Different Types of Colonies: - . settlement, exploitation, and spheres of influence. review:. as you saw in the dbq,

Economy in New England, Middle and Southern Colonies - I can analyze the english settlement of new england, mid-atlantic

THE FRENCH COLONIES and the settlement of English colonies - . standard 1.1 e.q . how did french colonies change the

Settlement and Colonization - . life after champlain. overview. european countries are trying to extend their power in

American History Objectives – 9/8 - . c.o. - swbat investigate the settlement of the southern colonies in the early