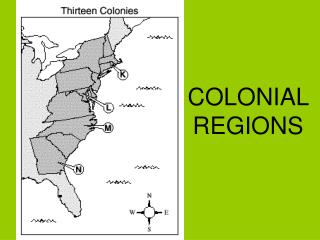 Conflicts in Colonial America - . conflict was common in british colonial america. who was in conflict with each other?.

Integrated Literacy Assignment - . glce: 4-g2.0.1 describe ways in which the united states can be divided into different

Colonial Folkways - . the colonial regions. focus question. pretend a visitor came to the classroom and asked about your

Colonial Professions - . the farmer. most people in colonial america were farmers most farmers in colonial times owned

Colonial Regionalism - . a review to date. colonial exploration by the british and spanish motivated by potential wealth,

Education – Colonial Times and Now - . how is education from the colonial times different from now? lets go and answer

Colonial Society - . a large colonial family. the family in colonial times. many colonists lived with their extended

The Colonial Dream Is Challenged - . by 1763, the three colonial regions had developed a distinct way of living while

COLONIAL DANCE - . a measure of civility. from: “dances of colonial america” by charles cyril hendrickson and kate

A Day in the Life of a Colonist and My Life Today - School. a colonial child used quill pens and hornbooks.i use pencils