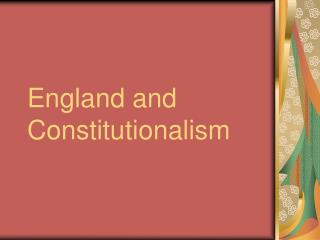 England and Constitutionalism. James VI (King of Scotland) becomes James I of England in 1603 (upon Elizabeth I death) Believed in absolute monarchy “a deo rex, a rege lex:. King’s power restricted due to Magna Carta & Parliament Restriction important for 3 reasons:

England and its colonies - . chapter 3 in the americans. journal:. if you were leaving england for north america, which

Aim: How did conflicts between the Stuart monarchy and Parliament lead to Civil War in England? - . november 30, 2012.

England - . why did england wait until the 1600s to colonize?. preoccupied with leadership crisis after the death of king

The Rise of Monarchies - . england, france, and spain. england. after the fall of rome. england was invaded by the angles

Paths to Constitutionalism and Absolutism - . england and france in the seventeenth century. two models of european

ENGLAND - . absolutism in england. fall of the roman empire. kingdom of england falls in and out of power between several

Seniors and Sport in England - . presented by: ryan adams research manager sport england 27 may 2004. outline. about

CONSTITUTIONALISM IN ENGLAND - . constitutionalism in england. the english exception. successful centralization without

Constitutionalism - . chapter 2. purposes of a constitution. provide legitimacy for a government consent of the people

Puritan New England - The world of the puritans who were the puritans? religious “dissenters” protestant reformation

Constitutionalism in England 1603-1689 - . tudors. war of roses—aristocracy fought over who would control the monarchy