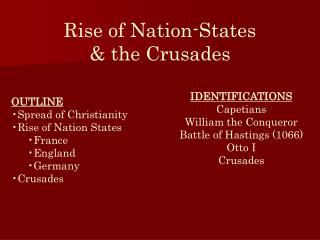 Crusades - . crusades. the crusades were expeditions undertaken, in fulfillment of a solemn vow, to deliver the holy

The Renaissance - . monday 9/23. share your responses regarding the impact of the crusades and the plague on the feudal

Demography of the United States - . s. introduction. the united states is an urbanized nation, with 80.8 percent of its