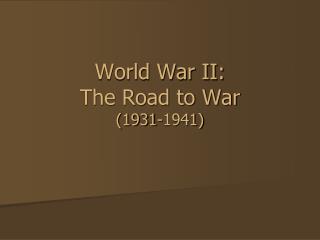 World War II: The Road to War (1931-1941). Section 1: The Rise of Dictators. Due to economic hardship, and bitterness from the terms of WWI resolution, several dictatorships arose in Europe in the 1920s and 30s. Totalitarian Rule. When government has total control over a nation. Herbert Hoover, Relief Efforts (1931) - . main points: 1. relying on the federal government in times of crisis will only