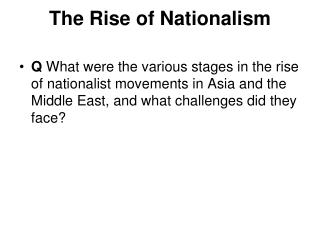 The Rise of Nationalism The Rise of Nationalism. Q What were the various stages in the rise of nationalist movements in Asia and the Middle East, and what challenges did they face?. Wilson’s 14 Points & Paris Peace Conference .

The Rise of Nationalism

The Rise of Totalitarianism - . two ways to keep control. vocabulary to know. totalitarianism. a system of government

Rise of the - . today, all the nations are alligning exactly as the bible said they would! possible scenario…. a man