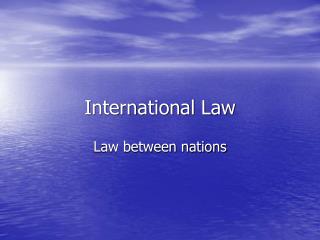 1.1 The Foundation of International Business - . 2 nd semester chapter 1. 1.1 focus (8). name products that you use that

THE MADRID SYSTEM FOR THE INTERNATIONAL REGISTRATION OF MARKS - . andré ntamack tel aviv, july 4-5, 2007. preparing the

INTERNATIONAL LAW - . states &amp; sovereignty. each country has laws for its own people, known as domestic law a