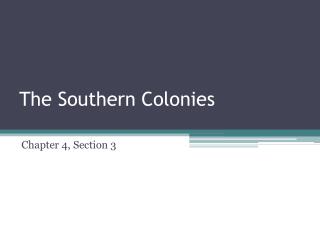 The Southern Colonies. Chapter 4, Section 3. For four year Charles Mason and Jeremiah Dixon surveyed the 244 miles boundary between Pennsylvania and Maryland They laid stone markers between the two colonies creating the Mason Dixon Line Divided the middle Colonies from the Southern Colonies.

Evolution of the El Ni ño Southern Oscillation (ENSO) from the Last Ice Age to Today - Winds of change:. evolution of

Evolution of the El Ni ño Southern Oscillation (ENSO) from the Last Ice Age to Today - Winds of change:. evolution of