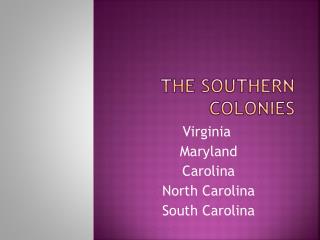 The Southern Colonies. Virginia Maryland Carolina North Carolina South Carolina. Virginia. Founded by John Smith in 1605 Virginia was founded for gold and riches. The first colonists to settle Virginia were wealthy gentlemen. Because of the rich soil tobacco was easy to grow.

Chapter 3 Settling the Northern Colonies 1619-1700 - . the settlement of new england. separatists. vs. . puritans.