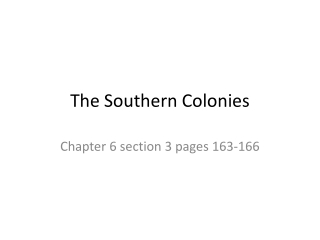 Chapters 4 and 5: American Life in the 17 th c - . eq: how was life in the southern colonies similar to and different

Southern colonies… - . were mentioned earlier as following the pattern of virginia. what about south carolina?.

The Southern Colonies - . coming to america with the growth of plantations, there was an increasing need for workers in

Government Develops in the Colonies - . pg 38-44. royal control over the colonies. charter-issued by the king to people