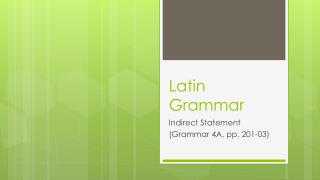 Latin Grammar. Indirect Statement (Grammar 4A, pp. 201-03). Pep Talk. We are learning about indirect statement. At first it may seem hard, but eventually it will make sense. It’s really important in Latin; you can’t read Latin without understanding it. . Direct and Indirect Statement.

Chapter 1 Grammar Using Nouns in Latin - . nouns in latin show case, number, gender, and declension. what do you know

Grammar - . mr. villanueva. grammar review. the test will not ask you directly about the “parts of speech”, but they

Latin Grammar - . how to conjugate a latin verb…. …or just recognise it!. enlighten me. groups. both verbs and nouns

LATIN GRAMMAR NOTEBOOK - . your personal resource to organize all those charts and rules, provided you follow my

Latin Grammar - . formation of the perfect tense of deponent verbs (grammar from 3b, pp.154-56). the perfect of