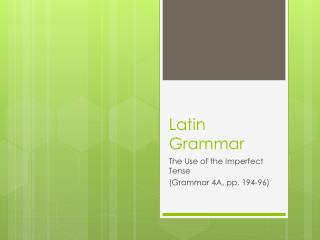 Latin Grammar. The Use of the Imperfect Tense (Grammar 4A, pp. 194-96). Aspect. We now are learning the imperfect tense. It is the second past tense we have learned in Latin. Some time ago we learned the perfect.

Salvete ! Welcome to Latin 1 - . 9/9/13. propositum : dwbat identify the basic goals and structure of their latin course

The Taiwan Issue and Its Implication for China-Latin American Relations - . professor jiang shixue chinese academy of