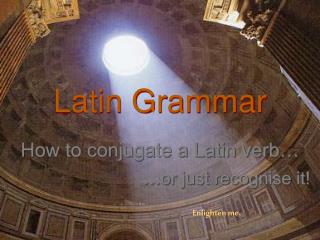 Latin Grammar. How to conjugate a Latin verb…. …or just recognise it!. Enlighten me. Groups. Both verbs and nouns are divided into groups, which define their declension (which endings are assigned to them)

LATIN GRAMMAR NOTEBOOK - . your personal resource to organize all those charts and rules, provided you follow my