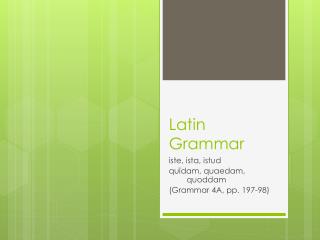 Latin Grammar. iste , ista , istud quīdam , quaedam , quoddam (Grammar 4A, pp. 197-98). Demonstratives. The verb dēmōnstrō in Latin means to point out. Demonstratives are words that point, like this or that in English. t his dog. that dog. Demonstratives.

Chapter 1 Grammar Using Nouns in Latin - . nouns in latin show case, number, gender, and declension. what do you know

Language Descriptions and Language Teaching - . classical grammar. based on grammar of latin/ancient greek inflections of

Latin Grammar - . formation of the perfect tense of deponent verbs (grammar from 3b, pp.154-56). the perfect of

Latin Grammar - . adverbs (grammar 3b, p. 160). adjectives. adjectives are words that modify nouns and pronouns. my

Where Caesar’s Latin does not belong: a comparative grammar based approach to Romance etymology - . eva buchi atilf