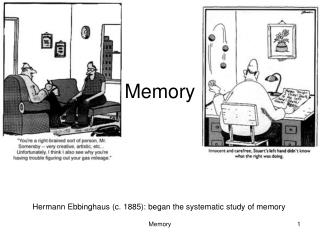 Memory. Hermann Ebbinghaus (c. 1885): began the systematic study of memory. Memory . What is memory. Is it a single thing? Are there neurologically independent memory processes (or systems) that correspond to psychologically useful components of memory models?