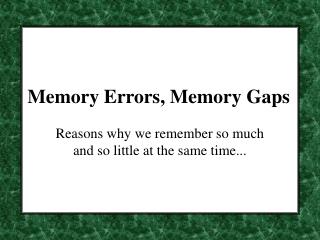 Memory Errors, Memory Gaps. Reasons why we remember so much and so little at the same time. Semantic activation & Inferences Schemas Update of memory . Memory and its failures. Semantic Activation. Example: You will hear a list of words, once the list ends, recall as many words as possible Types of Memory Errors - . it is important at this point to make the distinction between a memory error and a