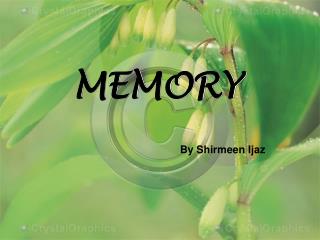 MEMORY. By Shirmeen Ijaz. What is memory?. According to Feldman, “ T he capacity to record, retain and retrieve information”. Process of Memory. There are three processes involve in memory system. Encoding Storage Retrieval. 1) Encoding.