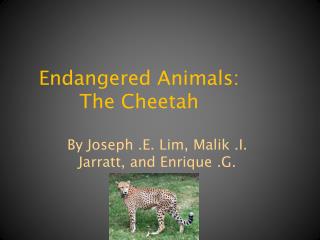 Endangered Animals: The Cheetah. By Joseph .E. Lim, Malik .I. Jarratt , and Enrique .G. Mendoza . Introduction. Cheetahs have been around the 1900’s and they are being extinct as the years go by. We are trying to persuade you to help cheetahs have a bigger population and not become extinct.

Smuggled animals - From cockatoos in water bottles to fish under a dress, some of the exotic animals that are illegally

Animals crossing - Why did the wild boar, llama, squirrel, snake and rhino cross the road? animals make the journey to

CHEETAH - . charles eglington 1918 - 1971. indolent and kitten-eyed, this is the bushveld's innocent the stealthy leopard

Animals - . 1. which animals are native to your country?. the cretan wild goat (capra aegagrus creticus), known as

Alphabet Animals - . in these pages you will find animals whose names begin with letters of the alphabet. have fun!.