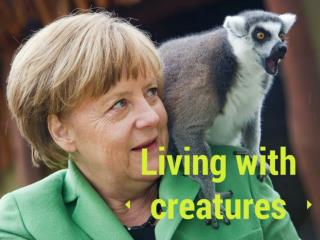 Photographers have documented the relationships between humans and animals in countless ways. Some photos depict how animals depend on us and others show how we rely on animals. The ways in which we share this world and interact with other living things is endless and sometimes very unique. Living creatures are ORGANIZED - . all made of the same collection of chemicals, but we are organized as… molecules

Creatures - . by: umar ibrahim. tigers are known to help because they keep the vegetarian animals in moderation. so if

Sea Creatures - . the maldives is surrounded by sea. video. objectives of the lesson . -identify at least ten sea

Sea Creatures - . by jessica herres. i'm going for a swim today. what do you think i will see?. a stingray?. a