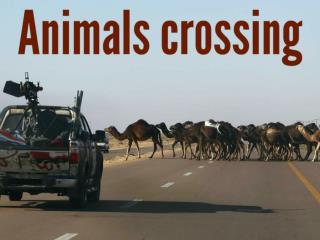 Why did the wild boar, llama, squirrel, snake and rhino cross the road? Animals make the journey to the other side. Animals - . by niamh miller . introduction. in the slide show we will be telling you about some animals, we also will be

Unit 2: Animals - . cubs – a word for some baby animals. unit 2: animals. food – what people and animals eat to live.

Animals - . what is an animal?. we take it for granted that animals are things that are fuzzy, furry and we can pet

Lecture 1 Plant Genetics Overview. How plants are different from animals? - Variation in quantity of dna polyploidy

Crossing Over in Meiosis - . ap biology ch. 13 ms. haut. crossing over. process by which parts of homologous chromosomes