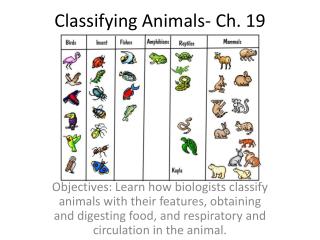 Classifying Animals- Ch. 19. Objectives: Learn how biologists classify animals with their features, obtaining and digesting food, and respiratory and circulation in the animal. Do Now: . Are all animals classified the same? What are some different classifications of animals? .

Classifying Animals - . lesson 3. let’s brainstorm different animals that we have seen. with your partner, write down

CLASSIFICATION OF ANIMALS - . learning objectives : to explain how animals are classified into groups. key words:. how do

Classification of Animals - . scientists have divided the animal kingdom into two main groups:. vertebrates (animals with

Classifying Animals - . 5 th grade science ms. bridgeland. now that we know how all animals are similar, we need to learn

Classifying Animals - . classifying . group animals by similar characteristics including: what they look like, where they

Classification of Animals - . click to continue. introduction. audience this projects is intended for third grade

Classifying Animals - . animals can be classified into six groups. mammals. what are mammals?. they breathe through their

Different Types of Animals - Vocabulary. live on land, at sea, in the air and underground are warm blooded have either

The Animal Kingdom - . chapters 12-19. chapter 12: porifera and cnidarians:. porifera (sponges): -invertebrates with a

Diversity of Living Things Chapter 4 Invertebrate Animals - . most animals are invertebrates. if you were asked to name