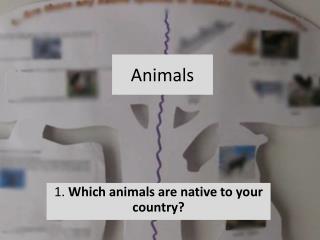 Animals. 1. Which animals are native to your country?. The Cretan wild goat (Capra aegagrus creticus), known as Kri-Kri, krikri or beast, is considered vulnerable species. This picture shows some native species of animals in Hungary.Some of them have been known since 9.th.century. Puli. INTRODUCTION TO ANIMAL DIVERSITY - . chapter 32 our kingdom we are animals. animals are. species-rich morphologically

Habitats for Plants and Animals by Denise Carroll - . what is an environment?. plants and animals live together in many

The Digestive System - . all animals eat other organisms - dead or alive, whole or by the piece (including parasites). in

Morning Warm Up! - . many animals eat plants. there are other ways plants help animals. how do plants and animals live