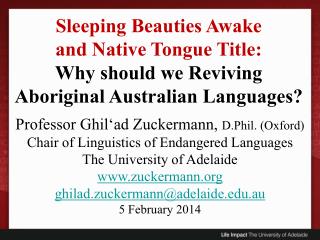 Psycholinguistics - a dead discipline? - . term coined in 1954 (osgood). aim: to describe the exact operation of the

Contextualization and Methodology: 30 Years of Cognitive Linguistics (and Beyond) - . dirk geeraerts. university of

A Course on Linguistics for Students of English - . the goals for this course. to get a scientific view on language; to