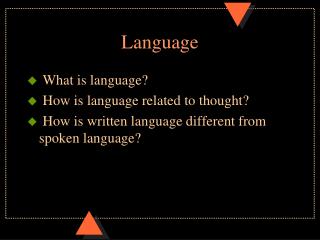 Language. What is language ? How is language related to thought? How is written language different from spoken language?. What is Language?. A system of communication that is: Hierarchical Rule-Governed Generative. Structure of Language. Phonology Semantics Syntax Pragmatics.