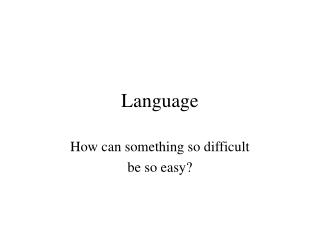 Language. How can something so difficult be so easy?. Language. Is complex Is multi-layered Requires a huge knowledge base Is interactive and social In short, language is hard. Yet almost everyone becomes an expert. Language: Overview and Plan. What is Language?