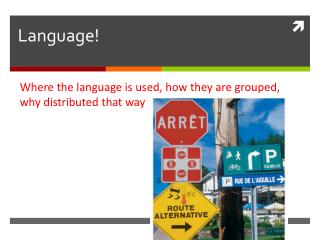 Language!. Where the language is used, how they are grouped, why distributed that way . Some Stats to Start with. The world has 7299 languages only 10 (including English) are spoken by at least 100 million people. Language - . study of language. linguistics : study of the internalized knowledge of a language – the rules for

Components of Literacy and ELL Students - . how do children learn a second language?. home language usenonverbal

Plain Language at NIH Karen Pelham O Steen Director, NIH Executive Secretariat - What is plain language? why am i telling

What is a language - ?. 2. one or two individuals (languages)?. how can you tell if a person speaks the same language as

Language - . by chevon garrard. language is a communication of thoughts and feelings through a system of arbitrary

The Geography of Language - Language overview. geographer's perspective on language (language as foundation of culture)

WHOLE LANGUAGE - . background. the whole language was created in the 1980s by a group of u.s. educators. the whole

TaK - Language - Some tak questions: how does language shape human thought? how does it influence what we know and how we

TOK~ Language - . myths and metaphors . what we have learned about language. geography can influence it body language

TOK: Problems of Knowledge : Language - . pete. what are some of the problems?. language is assumptive language is

Language - . infants and children face an especially important developmental task with the acquisition of language.

Language - . early years lecture 8. outline. what is language? how is language acquired/learned? how does it develop? -