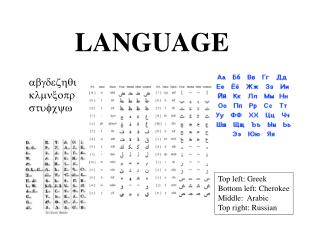 abgdezhqiklmnxoprstufcyw. Top left: Greek Bottom left: Cherokee Middle: Arabic Top right: Russian. LANGUAGE. What is language?. A form of communication that is a systematic set of arbitrary symbols shared among a group and passed on from generation to generation.