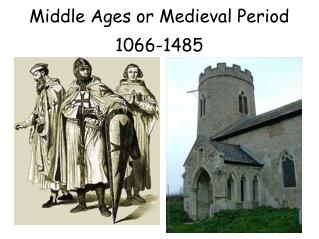 Middle Ages or Medieval Period 1066-1485. King Edward died without leaving a clear successor. He promised two-three people the kingdom. The final battle occurs at Hastings, England in 1066 between William of Normandy and Harold of Wessex.

The Early Medieval Period - . 500-1000 a.d. christian meeting places. in the new testament, the meeting place was

Building and Defending a castle - . by: jon fletcher. background information. the middle ages was a violent period of

The anglo-saxon era 449-1066 - . invasion of britain of the germanic tribes to the battle of hastings. anglo-saxon