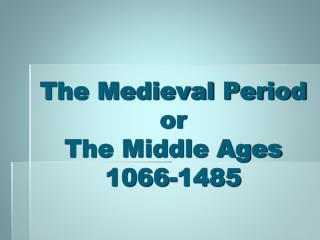 The Medieval Period or The Middle Ages 1066-1485. The Role of the Church. A. Physical Protection. Offered safe haven to neighbors Some churchmen were renowned fighters Monasteries preserved important arts of manufacturing (goods and texts)

The Medieval Period - . 1066-1485. the norman conquest. the normans were descendents of vikings who invaded the coast of