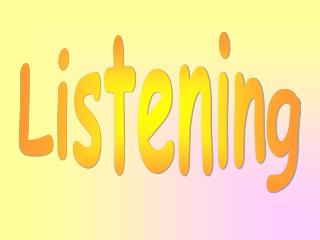 Listening - . the process of understanding. hearing vs listening?. hearing is a biological activity that involves

Listening… - . …to understand, to love, to influence, to be influenced &amp; to be heard. listening. exercise

Listening - . definitions:. hearing: a physical process of receiving sound. listening: a mental process of attending to

Listening - . by prof. patterson. listening is an important skill. hearing and listening are different processes hearing

Listening - . chapter 3. listening: a choice. hearing comes naturally. we all hear. listening is a learned social

Listening - “no one cares to speak to an unwilling listener. an arrow never lodges in a stone: often it recoils upon

Listening - . level 1 i understand instructions, questions and short phrases with the help of repetition, mime or

listening - . warming-up. did you watch the moon on mid-autumn day? did it look beautiful? is the moon bigger than stars?

Listening - Habits. most people only listen at a 50% efficiency rate.people usually remember about ? of the information

Listening - . we have two ears and one mouth so that we can listen twice as much as we speak. ~ epictetus. of the time

LISTENING - . do you hear what i hear?. listening. the deliberate, psychological process by which we receive, understand,

LISTENING - . visuals can be purchased at http://www.allposters.com content based on lucas’ the art of public