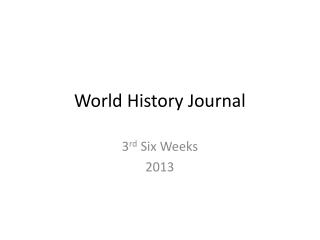 World History Journal. 3 rd Six Weeks 2013. Warm-up November 6-7. Romans were said to be willing to pay as much as a pound of gold for a pound of silk! . WH(4) Analyze how the Silk Road facilitated the spread of ideas and trade. .

Journal and Objectives - . english ii-h mrs. fenlon. after viewing “shift happens”. reflect and respond to the

The Importance of Journals to the Scientific Endeavor - . carol tenopir ctenopir@utk.edu university of tennessee

Journal of the History of Sexuality - . university of texas press http :// www.utexas.edu/utpress/journals/jhs.html.

The Accounting Historians Journal - F irst volume was published in 1974. we publish twice a year. older volumes are

DAY 1 JOURNAL - . write 1 page entry on how shaw might feel having come out of the recent battle feelings to include:

The Discipline of History - . mrs. j. montgomery. why study history?. “ ‘cause we have to.” learn from past