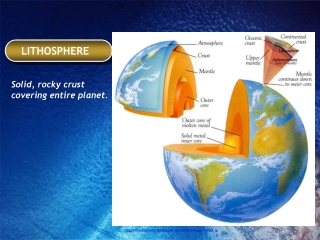 Plates on the Move - Geology rocks!. plates on the move. 6es science std: 1c chapter 6 – section 3. we have identified

Earth’s Spheres - By- kooper. earth’s spheres. lithosphere. the lithosphere is the crust and upper mantle of the

Spheres of the Earth - . unit 1, section 2. essential questions. what is earth science and how do the three spheres of

UNIT 3B The Lithosphere - . basketball review. question 1. who is considered to be the “father of modern geology”?

Structure &amp; Composition of the Earth - . 4.a. compare &amp; contrast the lithosphere &amp; the

To understand how plates move, here are more details about the Earth’s crust: - Lithosphere- made up of the crust and

The Lithosphere and the Hydrosphere - . observatory chapter 6: pages 182-219. st est ast es. why study the lithosphere

Forces That Shape The Earth - . ms.m.v.n.k.jyoti k.v.s.v.p.n.p.a .shivrampally. introduction. the earth is shaped by both

Earth ’ s Lithosphere - . “ in the developed world. . we no longer honor our relationship to the soil. . . soil has