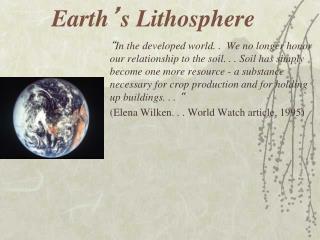 Earth ’ s Lithosphere. “ In the developed world. . We no longer honor our relationship to the soil. . . Soil has simply become one more resource - a substance necessary for crop production and for holding up buildings. . . “ (Elena Wilken. . . World Watch article, 1995). OC/GEO103 Lecture 5 Earth Structure - . what’s inside the earth? is there really another world at the center? what

CHAPTER 6: THE LITHOSPHERE &amp; THE HYDROSPHERE - . the lithosphere approximately 100 km thick the outer shell is

Human Impact - . how we affect the lithosphere. essential standards. een.2.2 understand how human influences impact the