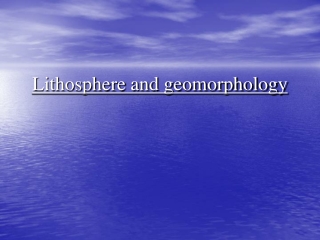 Lithosphere and Groundwater - . lithosphere. solid rocky crust of the earth rocks on the surface are classified in 3

Lithosphere and plate tectonics - . lithosphere. the lithosphere is made of the earth’s crust, and the upper portion of

Modern Geomorphology - . in this lecture we consider hypothesis and test. some slides drawn by dr. tracy furutani. rather

Glacial geomorphology - . glacier: “a natural accumulation of ice that is in motion due to its own weight and slope of