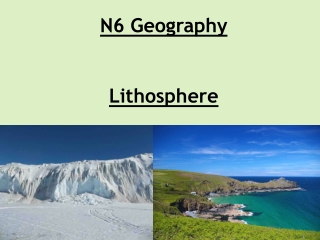 N6 Geography Lithosphere. Coasts. We are learning to…. Describe the location of coastal areas and features in the UK Differentiate between constructive and destructive waves Describe how the coastline is shaped by waves. I can…. Locate areas with coastal landscapes on a map HIGHER GEOGRAPHY LITHOSPHERE LIMESTONE SCENERY - . there are several types of limestone in britain - this presentation

The Lithosphere - . what are the different types of rock? how does the rock cycle affect different phenomena in our

The Lithosphere - . living on shaky ground. the lithosphere is the outer shell of the earth including the crust and the

OCEANIC Lithosphere - . where are the oceans?. predict : what percent of the earth is covered in water? what percent is

Higher Coasts Lithosphere - . higher coastal landforms &amp; processes. in this part of the course we will be looking

Tectonic plate = Lithosphere - . how plate tectonics got figured out. -study of continents (theory of continental