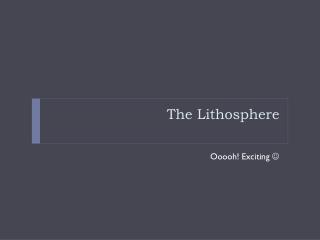 The Lithosphere. Ooooh ! Exciting . The Four Spheres. Strahler , A. and Strahler , A., 2005. Physical Geography . Wiley, NY. The Lithosphere. http://www.pbs.org/wnet/savageearth/animations/hellscrust/index.html The earth is composed of 3 parts The core The mantle The crust I-4 Dynamic Planet Notes - . the earth’s lithosphere. the boundary between the lithosphere and the asthenosphere is a

Natural and Human Systems - . what happens when systems interact? determine the significance of interactions between

What is the Lithosphere: it is not the asthenosphere