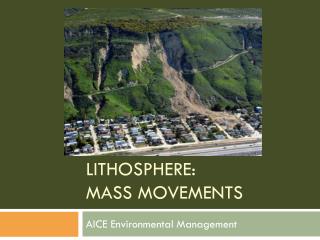 Design movements - . lesson objective – to understand the transition from crafted products to mass production, and the

The Four Spheres - . by: jeremiah. interaction of the spheres. water (hydrosphere) falls from the clouds and into the

Science Project - . by: paige paulson. lithosphere. lithosphere is the crust and the rigid part of earth’s mantle. the

Earth’s layers - . from the outside in. crust. continental crust is thicker and less dense than oceanic crust.

Chapter 5 Mass Movements and Subsidence - . causes vs. triggers. cause – situation that leads to failure trigger –

Spheres of the earth - . by: park myers. lithosphere. definition: the lithosphere is the crust and upper mantle of the

Quiz/Review - . get out a small piece of paper and put your name on it. when the bell rings, the quiz will begin.

The Lithosphere - . what are the different types of rock? how does the rock cycle affect different phenomena in our

Mass Movements aka Landslides - . def: movement of sediment due to gravity.

Nationalist Movements after WWI - . what led to the nationalist movements?. most movements started before wwi; wwi gave