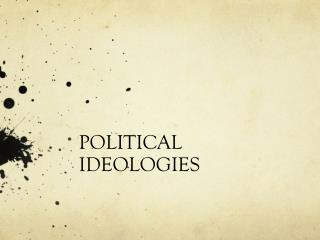 POLITICAL IDEOLOGIES. The term ideology was first used in 1796 by Destutt de Tracy. He argued that “idea-logy” means a new “science of ideas” like biology and zoology.

Rawls for Dummies - . outline. 1. what is rawls’ political philosophy? “justice as fairness” “political