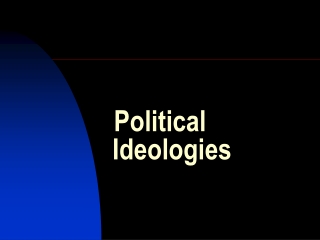 Political Ideologies. The role of ideas in politics What people think and believe about society, power, rights, etc., determines their actions Everything has to pass through the mind of the individual before he or she acts How do the ideas and beliefs appear in our minds? POLITICAL vs. NON-POLITICAL - Political – has to do with government or the way a people are ruled over revolutions –

Political Philosophy Political Campaign - . researcher. directions : your job is to find out the other parties and their

Political - From a greek word meaning, “having to do with citizens.” political impact is anything that affects the

Political Science 30 Political Inquiry - . measurement i. knowing a good measure when you see it. conceptual and

Political Science 30: Political Inquiry - How sure is “ sure ” ? quantifying uncertainty in tables. political

Political Science 30: Political Inquiry - . how sure is sure? quantifying uncertainty in tables. using two-way tables sat

Political Culture and Political Socialisation - . culture …. remember we have mentioned …. the nature of human being