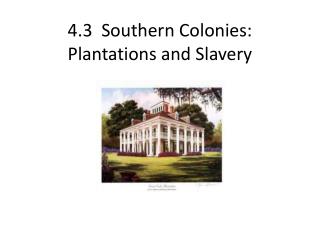 4.3 Southern Colonies : Plantations and Slavery. Plantation Economy. The south was ideal for cash crops like rice and tobacco. Crops required much labor. Transportation of crops was easy due to ports and waterways.

Slavery - . in your own words define slavery. slavery is…. a system under which people are treated as property and

The Southern Colonies - . coming to america with the growth of plantations, there was an increasing need for workers in

Slavery in the Colonies - . overview. slavery existed in the united states from the early 17th century until 1865, when