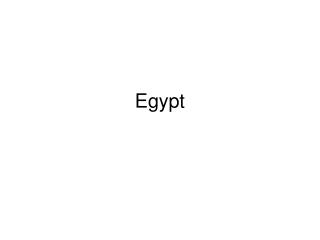 Map: Ancient Egypt - . unit 3: ancient egypt essential question: why was egypt the gift of the nile? i. geography of

A PEEK AT ANCIENT EGYPT - . developed by p. evans. map of egypt. an overview. egypt is a country located primarily in

Ancient Egypt - Alexander the great spread greek thought to many cultures and countries that he took over. egypt was one

THE EMPIRES OF EGYPT AND NUBIA COLLIDE - . chapter 4, section 1. objectives:. to identify key events in the history of

Intro to Egypt - . chw3m. egypt. egypt coalesces into a cohesive kingdom around 3100 bce not long after establishment of

EGYPT - . 4 th stop on our trip around the world. a quick video to begin!. welcome to egypt. locate egypt. egypt. most of

Redemption out of Egypt - . the journey from egypt to israel is typical of our salvation . god redeems us from sin so he

Egypt vs. Mesopotamia Drill - . write “e” for egypt, “m” for mesopotamia or “b” if it applies to both egypt

4.3 Egypt and Nubia - . trade in ancient egypt. although egypt produced a large surplus they lacked many other resources

Fashion of Ancient Egypt - . web quest egypt. remember! . you are on a research mission. the university or museum you