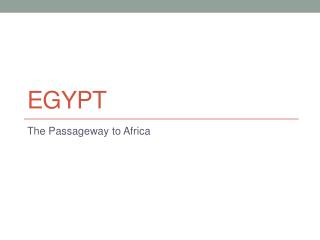 Egypt. The Passageway to Africa. Development of Egypt. Geological advantage Egypt develops along the Nile river The Nile flows from South to North making it possible to bring goods north Northern winds blow North to South so if you put a sail up you can travel south along the Nile