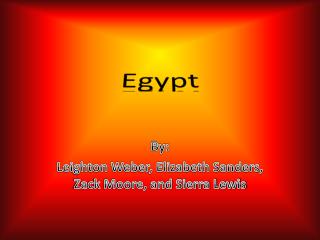 Egypt. By: Leighton Weber, Elizabeth Sanders, Zack Moore, and Sierra Lewis. Map of Egypt. Important People. Some famous Egyptians are: Alfed Faray was born in Zagazig , Egypt in 1929. He died in 2005 in London. He was a famous novelist.