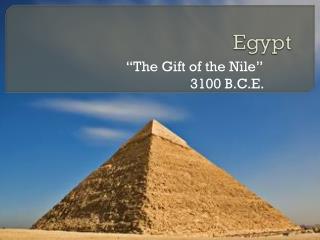 Egypt. “The Gift of the Nile” 3100 B.C.E. The Gift of the Nile. Outside the Nile river valley, was desert Survival and success= source of fresh water. Egypt. Survival benefits. Rule by king . Floods every July, August, and September. Natural irrigation, nutrient silt for fertilization